A few popular facts about BRICS countries’ resource potential: they account for about 1/4 of the global landmass, 1/4 of the global GDP, and more than 40% of the world’s population. Studying and forecasting development of this international association created in 2006 was important right from the beginning. For 8 years ISSEK has been participating in the international project on studying specific features of BRICS countries’ national innovation systems (NIS). This spring the participants discussed the objectives for its new stage.

The next stage of the BRICS project, pursuing much more ambitious objectives, was launched at the Systems of Innovation and Development seminar on 25—26 March, 2014 in Brasilia (Brazil). The seminar was hosted by the Centre for Strategic Studies and Management of Science, Technology and Innovation (CGEE) with which the ISSEK maintains active research partnership, and by the Brazilian Ministry of Science and Technology. The NRU HSE’s Institute for Statistical Studies and Economics of Knowledge was represented by Alexander Chulok, deputy director of the Foresight Centre, and Stanislav Zaichenko, senior research fellow at the Centre for S&T, Innovation and Information Policies.

The BRICS Project was launched by Globelics expert community, and for eight years was implemented by the consortium comprising, apart from ISSEK, the Federal University of Rio de Janeiro (Brazil), the Centre for Development Studies (India), the Tsinghua University (China), the Tshwane University of Technology (South Africa), etc.

During the project’s first years, the expert groups concentrated on developing a comprehensive vision of structural features, factors, and challenges relevant to the five countries’ innovation systems; sharing their experience in various innovation policy fields; and structuring international comparisons. 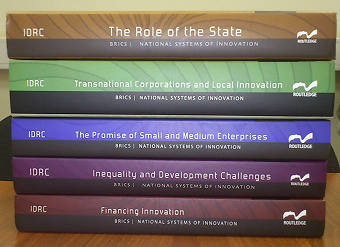 The results of this work were presented in 2013—2014 in a series of collective monographs BRICS National Systems of Innovation published by Routledge international publishers. The authors analysed key factors affecting development of NIS, taking into account specific features typical to each of the five BRICS countries. The chapters on Russia were written by leading ISSEK researchers. The following topics were selected for the monographs:

International comparison allowed to make two major conclusions. First, innovation-based development drivers in the five economies are not just radically different from most of the industrially developed countries’, but also differ between the members of the “group of five”. In other words, each BRICS country follows its own way of innovation-based development. Second, due to global and local challenges, development drivers in BRICS countries are changing very quickly — which requires simultaneously analysing numerous possible development trajectories for each of the five economies.

Objectives of the BRICS project are not purely academic, but imply integration into industrial and S&T policies — first of all through developing alternative national innovation system models for Brazil, Russia, India, China, and South Africa. Another important objective is to draw attention of academic communities, public authorities, and representatives of major corporations in the five countries to challenges associated with development of national innovation systems, and the need to establish and enhance international research cooperation. Involving higher-level stakeholders will become a more important priority at the next stage of the project.

The expert seminar in Brazil was preceded by the meeting of the BRICS countries’ STI ministers in Cape Town (South Africa) on 9—12 February, 2014. Russia was represented by the deputy RF minister of education and science Lyudmila Ogorodova. According to the ministry’s website, “the participants discussed a Memorandum of understanding on cooperation in science, technology, and innovation, and identified specific areas for BRICS countries’ cooperation in this field. These include food security, nanotechnology, new energy sources, science parks, incubators, etc.”.

The first priority for the BRICS project’s new stage is to secure recognition and support by all participating countries’ governments, and active involvement of academic and business communities. A five-party memorandum on cooperation of expert organisations is planned to be adopted in the near future, including basic provisions for and formal definitions of the subject area (i.e. NIS), reflecting the shared vision of the project’s further development, goals and objectives, and specific steps to be taken.

Officials from Brazil and China who took part in the seminar gave high marks to the presented research results, and expressed their deep interest in continuing the BRICS project, willingness to provide support, and cooperate at the highest level. Consensus was reached regarding the need to develop research strategy for the next period, taking into account the agreements made during the Cape Town summit — particularly regarding steady development of pragmatic, open partnership. The seminar participants agreed that at the next stage of the project they should move on from sharing experience to setting up long-term multilevel cooperation of the five countries in such areas as industrial, STI policy, academic exchanges and competence development, international financial relations, etc.

The seminar participants agreed that the BRICS project initiatives should be developed proactively — i.e. not reacting to immediate requests by administrations and governments but developing a systemic, coordinated response to existing and expected global challenges, in the framework of the five countries’ specific visions (as opposed to approaches adopted by industrially developed countries and international development institutes).

Against the background of increasingly acute global challenges, the BRICS countries’ economic trajectories (which their governments used to rely upon and considered to be the best) are beginning to change dramatically. The seminar participants discussed various aspects associated with finding new mechanisms for sustainable growth and development for the five countries; with industrial policy; and supporting and encouraging innovation activities in the real sector of the economy. Particular attention was paid to the new industrialisation concept, and its role in achieving sustainable development.

Learning, and development of innovation systems were discussed in the context of the S&T sphere analysis being the main source of knowledge for innovation activities, created during the previous project stages. Going beyond the limits of linear innovation activity model makes sources of competence increasingly important — including higher education, life-long learning, integration of education and science — which allow to achieve the level of productivity required for innovation-based growth.

Public procurement and its role in promoting demand for innovations was identified as a new area for the project. In BRICS countries governments play a major role as a top-priority (to innovative companies) consumer of goods and services. The experts shared their visions of planning, implementing, and coordinating various innovation-oriented procurement initiatives (including relevant legislation) for specific product groups and for whole industries.

BRICS countries also show a high inter-regional disparity in terms of their innovation-based, technological, and socio-economic development. The experts presented an analysis of local challenges and regional innovation policy trends in their respective countries, and discussed such government initiatives as supporting population mobility, social inclusion at regional level, etc. The national health systems were considered one more evidence of social inequality, and a high-priority long-term challenge for the BRICS countries. The seminar participants discussed possible innovation-based development trajectories for medical services provision systems proper, and for related industries including pharmaceuticals.

The importance of establishing top-level multifaceted cooperation between the BRICS countries, enhancing joint STI policy initiatives and coordinating major projects in commerce and in humanities permeated all discussions at the seminar in Brazil.

Foresight studies play an increasingly important role in organising and coordinating interaction between high-level stakeholders. No wonder that the BRICS project meeting participants discussed the prospects for building an international foresight platform, and a systemic information framework to promote and organise cooperation between a wide range of stakeholders — and first of all such NIS actors as government agencies, companies, universities, research institutions, development institutes, etc. To step up systemic efforts on informing stakeholders, it was proposed firstly to establish and support relevant databases, and secondly to publish each year detailed international analytical reports on innovation-based development in Brazil, Russia, India, China, and South Africa. The participants also discussed feasibility of establishing a foundation to finance joint innovation projects in the BRICS countries.

The ISSEK staff, in particular members of two divisions — the Centre for S&T, Innovation and Information Policies and the Foresight Centre — will continue to play an active role in the new stage of the BRICS project.

About
Institute for Statistical Studies and Economics of Knowledge