Foresight for Internal Use

On November 1, after the conference "Foresight and STI policy", the majority of its speakers gathered at the meeting of the International Advisory Board for HSE ISSEK Foresight Centre to assess the results of its recent  work and discuss the development strategy for the next year. 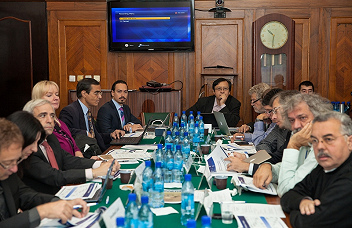 The International Advisory Board on Foresight meets for the third time. This year the number of its members doubled in comparison with 2012. At the request of the First Vice-Rector, ISSEK Director Leonid Gokhberg the Board discussed the achievements of Foresight Centre in 2013 and plans for future development with some "friendly criticism”, which has now slightly increased due to the more representative assembly.

The Board members, for example, raised the issue of further increasing Foresight Centre’s "weight" and spoke about the balance between various vectors of its activities — acting as a nationally and internationally significant research organisation and as a globally visible think tank. These directions involve different evaluation criteria. In the first case, the main impact indicators are quantity and quality of publications in high impact scientific journals, whereas in the second case, it’s the Centre’s authority among decision-makers, and its influence on policy and the societal development.

Both options are open to Foresight Centre and ISSEK in general. This was shown in Leonid Gokhberg’s introductory presentation to the Board. In 2013, ISSEK research activities covered new aspects of STI development. The Institute’s international recognition has increased, the interaction with the global expert community has strengthened, and the number of projects has grown, including the ones performed in collaboration with OECD and through the 7th EU Framework Programme (among which the Foresight exercise for the ERA.Net RUS project can be pointed out). Dynamics of ISSEK’s publishing activity is also encouraging: its staff members contributed to the books issued by Springer, Elgar, Routledge and other international publishers, as well as to scientific journals (including Nature), ISSEK working paper series on STI has also been developing intensively. Finally, the results of Russian S&T Foresight 2030, which has been completed this year, are used in a number of government documents.

Participants of the meeting highly evaluated Foresight Centre’s outcomes in 2013, but along with it they provided a number of recommendations for systemic project management in conjunction with other areas of work at ISSEK and HSE on the whole. The discussion touched upon career development, training courses, including the launch of the Master's programme, nurturing leaders (another impact indicator for the Centre as a think tank). Several experts stressed the importance of "smart specialisation" in project planning and recommended to increasingly bind the research programme to the global agenda.

Thierry Gaudin, president of the French association "Prospective 2100", outlined interesting perspectives for the development of Foresight Centre in the light of finding a solution to the systemic crisis that has engulfed the whole of Europe. "In Russia, the core of serious research in futures studies has formed, and the world community already takes over your experience," he said.

As if in response to his offer, during the Board meeting, an Agreement of understanding was signed with the most prominent Chinese research centre — Institute of Policy and Management of the Chinese Academy of Sciences. Earlier, in June and September, similar agreements were signed respectively with the Brazilian Center for Strategic Studies and Management Science, Technology and Innovation (CGEE) and the Institute for Technological Innovation, University of Pretoria (South Africa). In addition, it is also worth mentioning that ISSEK represents Russia in the international project Rising Powers aimed at studies of innovation in fast-growing economies.

The second part of the meeting was devoted to Foresight Centre’s new projects and to emerging trends in futures studies in general. The Board members continued to discuss specific aspects of Foresight methodology and ways to optimise its results and networking activities, in a "brainstorming" session.

Here are a few striking conclusions they made.

Foresight projects in science and technology will be increasingly oriented towards the needs of society, they’ll focus on the issues of well-being and sustainable development of the natural, social, innovative environment. Today "socialisation" of Foresight is already one of the most notable developmental trends. The Foresight “toolbox” consisting of dozens of methods, will further expand, in particular, those techniques will develop which stimulate creativity, idea generation and optimisation of management.

Strengthening cooperation in Foresight at the national and international levels will raise the issue of developing a common platform and a common language for futures studies.

The development of Foresight projects at HSE is mainly in line with these trends, which is proved by the creation of the national system for technology Foresight in which HSE experts are actively involved.