Renewable energy in Asia: a blend of pragmatism and optimism

On 27 April, 2016, on the eve of the international Global Energy Prize winners announcement, William Byun, managing director of Asia Renewables (Singapore) and a member of the GEP International Award Committee made a public presentation at HSE.

Igor Lobovsky, president of the Global Energy Partnership, welcomed the audience and presented the speaker.

William Byun has work experience at investment, law, and consulting firms, and at the California State University (USA); he devoted many years to the energy industry and now specialises in renewable energy sources. 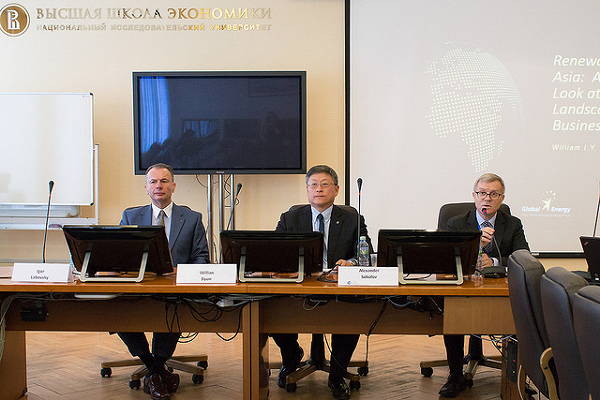 International organisations predict a brilliant future for renewable energy in Asia. William Byun also believes the region to be an “excellent place” for developing new energy sources. Of the plethora of various alternative energy sources, the highest potential in Asia have solar, wind, and ocean energy, and bioenergy.

Specific mix of renewable energy resources depends on local geography and climate. In some countries the sun shines for up to 300 days a year (allowing farmers to harvest 3-4 crops); other countries have mountains which provide strong winds; all Asian countries have developed agriculture – and a related need to utilise its waste. Due to urbanisation the amount of municipal waste is also growing, which could be used to generate energy too.

Another source of biomass is polluted water – an excellent environment for growing algae (third-generation biofuel resource). Again, there’s an abundance of that in Asia. A by-product of algae growing is clean water. “I remember how we asked in Bangladesh, “Do you have dirty water?”, and they said “As much as you want””. Many nations, especially island one, lack specialised water treatment and water purification facilities.

An important argument in favour of developing alternative energy industry is the grave legacy of Fukushima. Also, the Asian region is located in a seismically active area, so safe energy sources look increasingly attractive.

China would also benefit from new approaches to energy generation: large cities there are drowning in smog. And China cannot fully meet demand for electricity which is growing all the time due to the growth of industrial production. 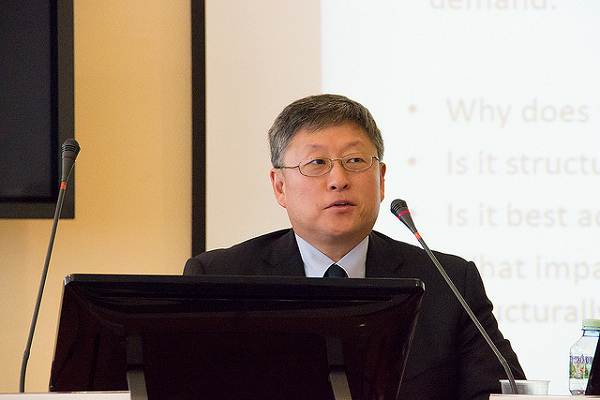 Surprisingly though, there’s no great demand for alternative energy in Asian markets yet. Why not? William takes a break, picks up a glass of water, drinks some, and shows it to the audience. “Some of you would say it’s half empty, while others would call it half full. Similarly, there’re different estimates of what’s happening in the alternative energy industry”.

There may be quite unexpected barriers hindering application of new energy sources in Asia. Most of the power plants working on renewable energy sources have rather small capacity, and are not scalable. Meanwhile the costs of building a large and a small power plant (not counting equipment) may be pretty similar. Accordingly, some investors see such projects as too small, “not serious”, while others invest in more familiar markets such as real estate.

Another issue is the need to find specific technological solutions for every region in every country. E.g. installing equipment in small remote islands involves various problems with delivery.

However, the biggest barrier is ill-considered government policies to support application of renewable energy sources. Some countries issue too long documents and adopt too many rules, while others cannot make the price of energy generated from renewable sources sufficient to recover capital investments. Accordingly, investors go to countries where the rules are simple and clear, and the prices are attractive – such as Thailand.

Each Asian country has its own reasons to pay more attention to “green” energy sources, believes William Byun. Though renewable energy is unlikely to fully replace conventional sources in the region in the next few years, the share of the former would keep growing at a high rate. Asian countries have a huge renewable energy potential; demand for it will grow, and it will be increasingly utilised, concluded the speaker.

In the last slide the presenter once again returned to the half-empty – half-full glass question, quoting the football coach Jim Harbaugh’s answer to it: “This question as such is meaningless. If the glass is half-filled and you like what’s in it, it should be filled to the brim. But if it’s half empty and you don’t like its content, throw it away and find something else”. 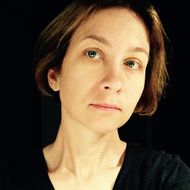 Liliana N. Proskuryakova
About
Institute for Statistical Studies and Economics of Knowledge