Alena Nefedova, a Junior Research Fellow at the Laboratory for Economics of Innovation of the HSE ISSEK, presented the results of the study of the export potential of Russian education at the research seminar of the Centre for Global Higher Education at the UCL Institute of Education, where she interned in the month of March. 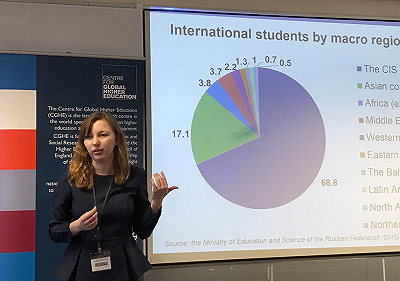 The Centre for Global Higher Education was established in 2015 at the Institute of Education of the University College of London (UCL Institute of Education), a global network of 40 researchers from countries such as Japan, the Netherlands, China, the USA and Ireland, among others. It is headed by the world-famous researcher of education prof. Simon Marginson, a long-time collaborator with the Higher School of Economics. Due to this partnership, Alena was given the opportunity to tenure a month at the UCL Institute of Education as a "guest researcher" (assuming the use of a full-time workplace, access to the institute's library funds, electronic resources and corporate mail).

During her internship, Alena attended the Annual International Conference "Higher Education: changing global relations" on March 1, and presented a report at the Global Centre for the Study of Education research seminar, which was held on March 9. The report was based on the results of the thesis "Competitive strategies of leading the Russian universities to attract foreign students." Alena's presentation lasted about 40 minutes, followed by an equally lengthy series of questions and answers. Judging by the feedback and reactions of the audience, Alena Nefedova's speech made a positive impression on the audience. Professor Marginson noted that it was a very cognitive and thoughtful report, and expressed a desire to continue cooperation.

Presentation of Alena Nefedova and audio recording of her speech

Summary of the report:

In the world education market, the competition of universities for the best students is growing. Alena analyzed the export potential of Russian education in terms of two theoretical approaches — neo-liberal (in which the university acts as an autonomous unit and attracts foreign students for profit) and political-economic (in which states compete with each other at the level of national education systems and increase Their political influence through education).

Based on statistical data and the results of sociological surveys, Alena demonstrates that Russian higher education is currently being deployed mainly toward students from the CIS, contributing, among other things, to increasing the political loyalty of the Commonwealth states. The main source of profit, in this case, is a distance education under the bachelor's programs and specialized programs.

Nevertheless, the experience of several leading Russian universities shows that an active policy of stimulating the export of educational services helps universities attract talented students not only from the CIS countries but also from other foreign countries.

Some conclusions from Alena Nefedova's speech are cited by the weekly magazine Times Higher Education, the most authoritative resource covering higher education. The article titled "Russia targets soft power, not money, from international students", in particular, says that Russian higher education is more a means of "soft power" that helps the country to strengthen its weight in the former Soviet republics than it is a source of getting significant income from foreign enrollment.

Higher education: changing global relations (news about Alena Nefedova's report on the site of the Global Centre for the Study of Education of UCL)