The HSE ISSEK released its fifth Russian Regional Innovation Ranking at a press conference hosted by TASS. Almost half Russia’s regions are relatively stable in terms of innovative development: their positions in the ranking have not changed significantly. The Republic of Tatarstan, followed by Moscow and St. Petersburg, tops the Ranking.

This annual ranking, published since 2012, uses a custom set of indicators based on data from many years of HSE ISSEK's research.

Almost half Russia’s regions (40) are relatively stable in terms of innovative development: their positions in the ranking have not changed significantly.

As seen previously, a more than 3.5-fold gap separates regions at the top (the Republic of Tatarstan) and bottom of the ranking (Jewish Autonomous Region).

Seven regions have improved their ranking by 10 or more positions, including the Vologda (+19 positions), Kamchatka (+18), Kurgan (+14) and Bryansk (+12) Regions, the Republic of Bashkortostan (+10), the Republic of Yakutia (+10), and Krasnodar Territory (+10). The researchers noted that ‘better innovation policies played a key role in these regional success stories.’

Some regions have sunk to the bottom of the list due to factors such as insufficient S&T potential, poor innovative activity of local companies and low quality of innovation policy. The regions that experienced the greatest decline include the Republic of Komi (-17 positions), Kursk Region (-14), the Republic of Kabardino-Balkaria (-13) and Amur Region (-12).

Most of the regions that have dramatically changed their positions on the latest scoreboard have experienced similar fluctuations in the past, mainly due to inconsistent local policies. In contrast, sustainable achievements are rooted in coordinated efforts by government, companies, universities, and research institutions.

Regions have witnessed a gradual levelling off in terms of the climate for innovation, as is reflected in the SECI. The number of regions at the top of the SECI ranking increased from 12 to 28 (nearly by 33% of all regions rated) compared to the previous year, while the number of those at the bottom decreased by 1.5 over the same period.

Moscow and St. Petersburg are the two leaders in terms of SECI, and are likely to remain unsurpassed in Russia in areas such as employment in knowledge-intensive sectors, adult education, access to higher education, and internet access.

The active replacement of fixed assets at local enterprises contributed to improved ranking of regions such as North Ossetia (from 34th to 8th position) and Kaliningrad Region (from 33rd to 12th position).

In contrast, a few regions dropped to lower positions due to the lack of any investment in upgrading fixed assets (the Republic of Altai, the Republic of Khakassia, Trans-Baikal Region, Primorsky Territory, Novgorod Region and others), combined with reduced access to higher education (Voronezh Region) and the internet (the Republic of Mordovia, Omsk Region).

It's All About Human Resources

Half of Russia’s regions, including the Volgograd, Penza, and Orenburg Regions and the Republics of Chuvashia and Kabardino-Balkaria, experienced a decline in their S&T potential (STPI), particularly due to lower R&D effectiveness.

St. Petersburg tops the STPI rating due to its characteristically high investment and employment in R&D, inventor activity, and the production and export of advanced technology.

In terms of STPI performance, St. Petersburg is followed by the Nizhny Novgorod and Ulyanovsk Regions and the city of Moscow, while Altai, Pskov Region and the Republic of Ingushetia come last on the list. Scientific and technical potential remains low in the Trans-Baikal Region, the Republic of Kalmykia and Kurgan Region; overall, STPI is below the national average in more than 80% of Russia’s regions.

Three regions in the Volga Federal District, including the Republics of Mordovia, Chuvashia and Tatarstan, are the top performers in terms of IAI. In the Republic of Mordovia, innovative products account for nearly 29% of total industrial output, three times the national average.

The Republic of Bashkortostan moved from 34th to 3rd position in the IPQI ranking thanks to its newly established Council for Science under the auspices of the Head of the Republic of Bashkortostan, and also thanks to federal subsidies for building infrastructure for innovation. Likewise, Leningrad Region moved from 59th to 29th position after the establishment of a Council for Science and Technology under the governor. The adoption of regional innovation support programmes contributed to the advancement of the Kurgan and Vologda Regions, and of the Perm and Krasnodar Territories.

In contrast, the city of Moscow experienced the greatest IPQI decline of all regions, from 11th to 42nd position, due to the fact that it lacks a high-level Council for Innovations and because it repealed local legislation on scientific, technological and innovation activities.

The Republic of Tatarstan boasts the highest IPQI performance of all Russia’s regions, while the Nenets AR comes last on the list, with a zero rating.

Where the Future Begins

The longest innovation planning horizon (based on the availability of a draft regional socio-economic development strategy to 2050) brought Yakutia to the top of this new ranking, followed by St. Petersburg, while the city of Moscow and Moscow Region rank 7th and 13th, respectively, based on the number of local publications on achievements in science and innovation.

In Tula Region (fourth position), specific language ‘associated with science, technology and innovation’ is used more often than in other regions.

All FPI components are high in Sverdlovsk Region, bringing it up to third position in the ranking.

In addition to the above, the FPI top 20 include the Republic of Tatarstan, Novosibirsk Region, the Republic of North Ossetia, Krasnoyarsk Territory, Tomsk and Tambov Regions, Altai Territory, Kaluga and Ulyanovsk Regions, Krasnodar Territory, and the Rostov, Belgorod, Leningrad and Voronezh Regions.

As this list shows, those regions best prepared for the future are those where innovation thrives now: all except six regions in the FPI top twenty also top the overall RRIS. 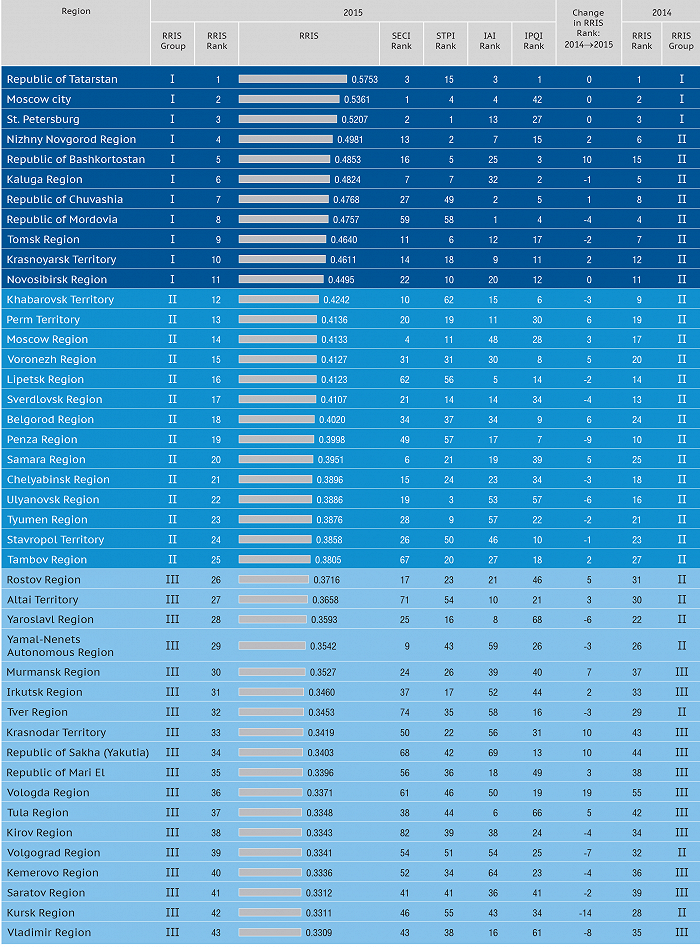 About
Institute for Statistical Studies and Economics of Knowledge