“Who is Going to Supervise Policy-Shaping Machines?”

Andrea Di Maio, a Managing Vice President in Gartner Research, spoke about forthcoming changes in the public sector’s digital services, and technology and social trends supporting the shift from e-government to digital government. On 20 March the Gartner’s top manager made a presentation to staff members of the HSE Institute for Statistical Studies and Economics of Knowledge, and the Institute for Public Administration and Governance. 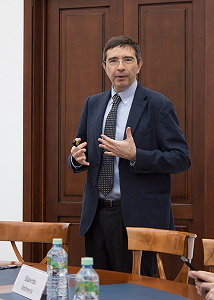 The present-day economy is becoming increasingly digital. A trend towards digitalisation and application of open data sources is also evident in public administration. In developed countries governments promote not just new services but also new models for their provisions, and even transfer, to a varying degree, the service infrastructure to platforms with unrelated to public administration functionality, in particular monitoring and control-related activities. The speaker described the emerging trend of applying advanced digital technologies in the “digital maturity” terms.

According to the Gartner classification, the e-government stage (currently achieved by most of countries) is the initial stage on the digital maturity scale. Despite the fact that citizens’ interaction with the state is becoming increasingly more convenient to users, due to development of electronic public services, the underlying foundation of this process – collection and application of relevant data –essentially remains in its conventional form. When we move on to the most advanced digital maturity stage – digital government, the state itself becomes just another user of open data-based services. According to the speaker this will primarily affect public security, education, health, and taxation spheres.

E.g. Big Data already allows to predict possible crime scenes based on analysing tens of thousands of street camera recordings, and more efficiently position police patrols across large territories. In the health and social security areas, Big Data-based solutions help people with Alzheimer disease: sensors installed in their homes send data about their condition to relatives or doctors. Using integrated data from educational institutions, medical facilities, social support centres can help to identify criminally inclined adolescents, and plan individual sessions with them. Data about food purchases at shops or fast food restaurants indicating people’s propensity for fast food or alcohol may prompt the doctor to invite the person for an unplanned check-up. Application of Big Data for taxation purposes on the one hand will enable the state to more accurately calculate the amount of taxes due from specific individuals (e.g. quickly check the size of their taxable real estate using Google maps), while on the other offer citizens more convenient tax payment options, or even ways to reduce the taxes. In future revenue services will work more like consulting agencies, noted Andrea Di Maio. 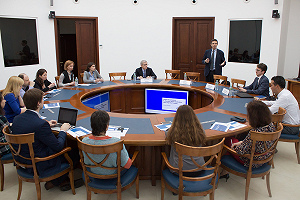 Big data affects all spheres of life, penetrates all sectors of the economy, and changes our views on ways of doing business and running the state. But behind the huge advantages offered by the digital economy, certain challenges also lurk.

Automation and robotisation of production will lead to a significant reduction of jobs. The biggest question all governments should be asking now is which professions will be the first to go, and what could they offer to people who lose their jobs.

Artificial intelligence (AI) will take on a huge number of routine operations. The speaker joked that the only professions which will survive the arrival of AI will be hairdressers and plumbers. Even politicians should worry: AI will be better than people at shaping evidence-based policy, though the decision-making would still remain a human responsibility. And another question arises: who will oversee the policy-making machines?

Yet another worrisome area is user data security. Ideally, Big Data should be used by the state as a tool for shaping evidence-based policy, and implementing it in an efficient, controlled manner. But will people be willing to accept that every sales receipt from a shop or drugstore, every school mark, every case of jaywalking would be carefully recorded and processed for public administration purposes? And maybe not just for them?

And doesn’t the idea that as we move on towards the digital government model the state itself will become increasingly less obvious, look like an utopia?

The role of social media in public administration 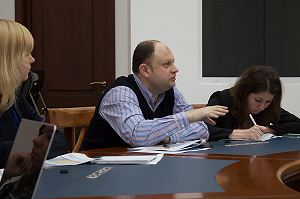 The speaker gave the example of the Italian party “MoVimento 5 Stelle”, established in 2009 by the popular comedian Beppe Grillo. “MoVimento 5 Stelle” entrusted the choices of the party candidates representing Italy in the European Parliament to people, making online voting available to them. And though the party is frequently accused of being populistic, this move shows the people a real opportunity to take part in political life – an alternative to delegating their choices to a small group of individuals, and highlights the growing role of the internet and information technologies in the society.

On the other hand, the internet changes not just the life of individuals but also the workings of the state – by giving it information about people’s mood, desires, and opinion of the policies the government pursues. The infinite number of telegram channels, blogs, twitter accounts, and independent media should not remain unnoticed, despite their frequent subjectivity and partiality. Information published via social media should be taken into account by the state when it shapes its policies. However, concluded the speaker, though numerous tools and mechanisms for people’s participation in political decision-making will emerge in the future, the state is not going anywhere – albeit it will become a little more transparent. But it will still have the last word.