In Tula, a city packed with the Russian defence industry, Californian musician David Brown and fan Pavel Bazdyrev have been making high-end microphones since 2014, taking advantage of cheap labor and second hand machinery from Kalashnikov arms plants. Vasily Abashkin, Leading Expert at the Centre for Industrial Policy HSE ISSEK, told Associated Press that the engineering sector in Russia has not yet caught up with foreign countries to bridge the gap of the last two decades.

Claims of hacking by the Russian state may be feeding international tensions, but they’ve given Californian musician David Brown a great icebreaker when selling his line of Russian-made microphones.

“We give free hacking lessons with these microphones,” he tells potential buyers in Los Angeles. “Watch what you say because they never turn off.”

Brown, who’s often toured Russia with his band Brazzaville, teamed up with fan Pavel Bazdyrev in 2013 to start making top-end musical equipment in Bazdyrev’s home city of Tula, which is dominated by the Russian defense industry.

Though the business climate is difficult, the costs are low and they were able to buy secondhand machinery from Kalashnikov plants. The result is a range of studio microphones that have found their way into Coldplay and Radiohead’s recording sessions, and are beating more established rivals on price.

It’s a rare tale in Russia, which has struggled for decades to diversify its economy beyond oil and gas, something former US President Barack Obama recently drew on.

“Their economy doesn’t produce anything that anybody wants to buy except oil, gas and arms,” he said last December. “They don’t innovate.”

As the country recovers from a brutal recession triggered by its dependence on the oil industry, President Vladimir Putin has often talked about making life easier for small businesses and other sectors. But reforms are often piecemeal or contradictory. The experiences of Brown and Bazdyrev sum up many of the pros and cons of operating a small manufacturer in Russia.

The company, called Soyuz Microphones, takes advantage of lower labor costs to undercut foreign competitors—Soyuz’s top-of-the-range microphone costs $3,500 against $8,000 for rival models. It made its first mic prototypes in 2014 and sold 160 of the retro-looking items last year, enough to turn a profit.

“We’re located in a regional Russian city where the salaries are much lower than they are in Moscow, let alone in the West. Producing a mic in that way in America or in Europe would be prohibitive cost-wise,” says Brown, who visits Russia regularly to check on progress, while Bazdyrev handles day-to-day matters.

It’s a good deal for the 12 employees, too, such as lathe operator Roman Ilyukhin, who says his wage of 60,000 rubles ($1,000) is almost double what he used to earn elsewhere in the city.

The factory occupies two floors in a rundown building, its renovated rooms with pink wallpaper in stark contrast to the gray Soviet-era apartment blocks just outside.

The name Soyuz — meaning “union” — refers to the “union of East and West” in the company, but is also full of historical significance in what was once the Sovetsky Soyuz, the Soviet Union. Soyuz capsules have since the 1960s been the workhorse of international space flight.

The name also encapsulates some of the contradictions of the Russia economy: while it is a comparative leader in state investment for research and development, such as in space exploration, it often fails to turn cutting-edge science into commercial innovation. Wage levels are lower than in most of Europe, but Russian companies still struggle against Asian rivals who can make products faster and cheaper.

“Our engineering sector, although developing actively, has not yet caught up with foreign countries to bridge the gap of the last two decades,” said Moscow-based expert Vasily Abashkin of the Higher School of Economics. “Plus the Asian countries are getting ahead, including in terms of providing engineering services [faster], which makes our engineering sector less competitive.”

Few small- and medium-sized Russian companies have the know-how to use government schemes meant to help exporters, Abashkin adds. Though Russia excels at software development, attempts to move into hardware like electric cars or phones have yet to make a splash.

By contrast, China, which during the Cold War was similarly reliant on state-owned heavy industry, has developed successful companies in sectors like technology and retail and boasts some big consumer brands, like handset company Huawei.

Consumer start-ups in Russia can struggle, in particular, with the burden of regulation, predatory officials demanding bribes and the dominant position of state-owned firms that don’t welcome rivals.

Brown and Bazdyrev say they never had to pay bribes, but they’ve been treated with suspicion in a country where foreign investment in consumer goods is rare. They say export permits are tricky to get and authorities avoid paying tax rebates.

The pair originally tried to partner with a local state-controlled microphone firm, but that deal was scuttled when the entire management was fired at short notice.

Bazdyrev says local officials in Tula even froze the company bank account, suspecting the firm might be a front for fraudsters. The decision was only reversed when a tax inspector visited the factory in person.

Government reforms, meanwhile, have not helped much. In recent years, entrepreneurs have received tax breaks, but have also been hit with higher social security contributions. The government has talked up developing domestic industry during sanctions, but effects are largely limited to agriculture.

The US and European Union sanctions against Russia, imposed since 2014, are another obstacle. Payments from abroad can be difficult to get and US authorities sometimes put them on hold.

“We’ve got to explain that it’s not in support of terrorism or anything,” Bazdyrev said.

He and Brown did consider moving the factory to neighboring Latvia or Estonia if the sanctions or regulations get too difficult to deal with. But for now, they say, Russia’s low costs make it easier to stay put.

At a tense time in world politics, Brown is pitching their microphones as a sign of cooperation, highlighting how they’re made using machines from a Kalashnikov plant.

“I like to think about our company as swords into plowshares,” he says. “We use lathes that were made by Kalashnikov to create something that’s the complete opposite of war — it’s for creating music and spreading goodwill.” 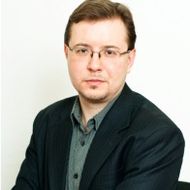