On December 18, Bruno Le Maire, French Minister for the Economy and Finance, delivered an open lecture at HSE. In his speech, the Minister discussed the prospects for cooperation in the field of science, technology and innovation between Russia and France.

The video of the open lecture of the minister and the full version of the theses of his speech are available on HSE web portal. Here are the extracts from this article. 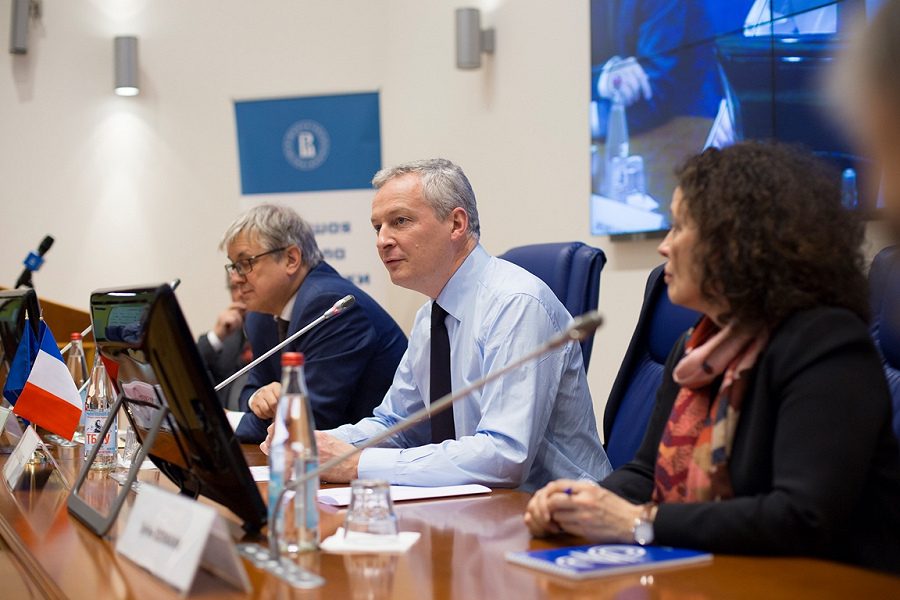 On reforms and innovations in France

Transforming France is not an empty formula. We are proud of our welfare state and the equal society it ensures. We do not want to change that. But for too long, we have been addicted to public spending. Debt and taxes have become excessive and they weigh on our economy. For some, France had become synonymous with heavy taxes, but now when people think of France, they think renewal, recovery, innovation and competitiveness. Now we believe we need to create wealth before spending it.

We need to create the right conditions so that businesses can be profitable — so that they invest, innovate and create jobs. We have already changed our labour laws to make them more flexible and to make it easier for companies to recruit workers. We are overhauling our tax system. Our corporate tax will be lowered to 25% over five years. We are introducing a flat tax of 30% on capital revenues — to encourage both French and foreign investors to invest in our country.

We are encouraging innovation through a special tax credit. In early 2018, we will create a new fund of about EUR 10 billion to finance disruptive innovation. We believe that innovation is the key to a country’s success. Countries that will be able to support innovation, particularly disruptive innovation, will have an advantage. Those that fail to do that will be dependent on other countries, such as the USA and China. Even if we have a great relationship, we don’t want to have to rely on the USA and China for the innovative developments of the future. <...>

In the space of a few months, we have managed to completely change the debate on taxation of internet giants, such as Google, Amazon, Facebook, Apple, and Microsoft. For too long, these companies have been able to make huge profits while paying very little tax in countries such as France and Germany. This cannot go on. It is not fair. Smaller local businesses pay their taxes, why should very successful internet giants not pay theirs? It also puts our welfare state at risk. Under France’s leadership, we received support from Germany, Italy and Spain. We presented a common project to all EU members, which has already been supported by 19 European countries. I am confident that we will have a new legally binding framework in place within two years. Paris and Frankfurt are competing to become the new EU’s financial centre. Paris has a number of advantages. We are changing the taxation system and making it more attractive for foreign investment. I believe that Paris also offers a better financial regulation. In addition, France is now the leader in ‘green finance’, and the future belongs to it. I can give you one more reason: ask the ladies, where would they like to spend the weekend — in Paris or in Frankfurt?

I am deeply convinced that we need a stronger Europe that stands up for its own interests and that is able to compete at the same level with the United States and China. This is even more important in today's world with the United States taking more and more unilateral decisions that have a tremendous impact on the European and global economy. <...>

On traditions and prospects of scientific cooperation

<...> France and Russia have built strategic partnerships over time — on space programmes, energy, and car manufacturing. In space programmes, our cooperation began when Russia was still part of the USSR. As our partnership between Roscosmos and Arianespace illustrates, our cooperation has been strengthened over time. On energy, cooperation is alive and well as recent events in Yamal highlight. The work of Total and Novatek has been impressive (editor’s note: the companies are jointly building a natural gas liquefaction plant in Yamal). A revolution is coming in the power industry, and leading French companies are ready to invest more and more in renewable energy sources. The main issue here is the storage of such power sources, and we are ready to cooperate with Russia in this area.

Today, France is the top foreign employer in Russia with nearly 170,000 jobs. Almost all of our major listed companies — the so-called CAC40 — are present in Russia. But we don’t want to merely trade with Russia; we want to invest in the future of Russia and in the future of the relationships between France, the European Union and Russia.

We see that Russia is shifting towards a new economic model, and this is good news. Russian officials are setting new priorities, where the development of Russia’s own market is key. Russia wants to reduce the volume of imports and develop domestic companies. I believe Russia is right in trying to diversify its economy. The country wants to invest in innovation and new technologies, and this is essential for any country. The best example of this resolution can be seen in Skolkovo. This site is evidence of the vitality and dynamism of Russia. It is evidence of the talent of its young people. We believe that we have much to bring you in this global project.

Research and innovation must be the driving force of our future relationship. Together with Minister Orechkine, we are launching a common work on the ‘City of the Future’. I am convinced that it paves the way for fruitful cooperation between our companies for the citizens of our two countries.

In summer 2018, Russia is hosting the World Cup, and in May 2018, President Macron will visit the Saint Petersburg Economic Forum. These two events will be a unique opportunity to show that Russia’s relationship with the rest of the world is not only about geopolitics but also about citizens. Our societies and our companies can cooperate and share common passions: passion for sport, literature, music and the arts, as well as passion for innovation and for new technologies. I am relying on the students, the new generation, who keep these passions alive.