The annual meeting of the International Advisory Council  of the HSE Institute for Statistical Studies and Economics of Knowledge took place on 14 November. This year the Council convened before the 'Foresight and STI Policy' conference, so discussions of the ISSEK’s 2018 results, its plans for the next year, and approaches and techniques for studying and foreseeing S&T development occasionally overlapped with the conference agenda. The debates highlighted major trends which could affect relevant policies in the coming years. 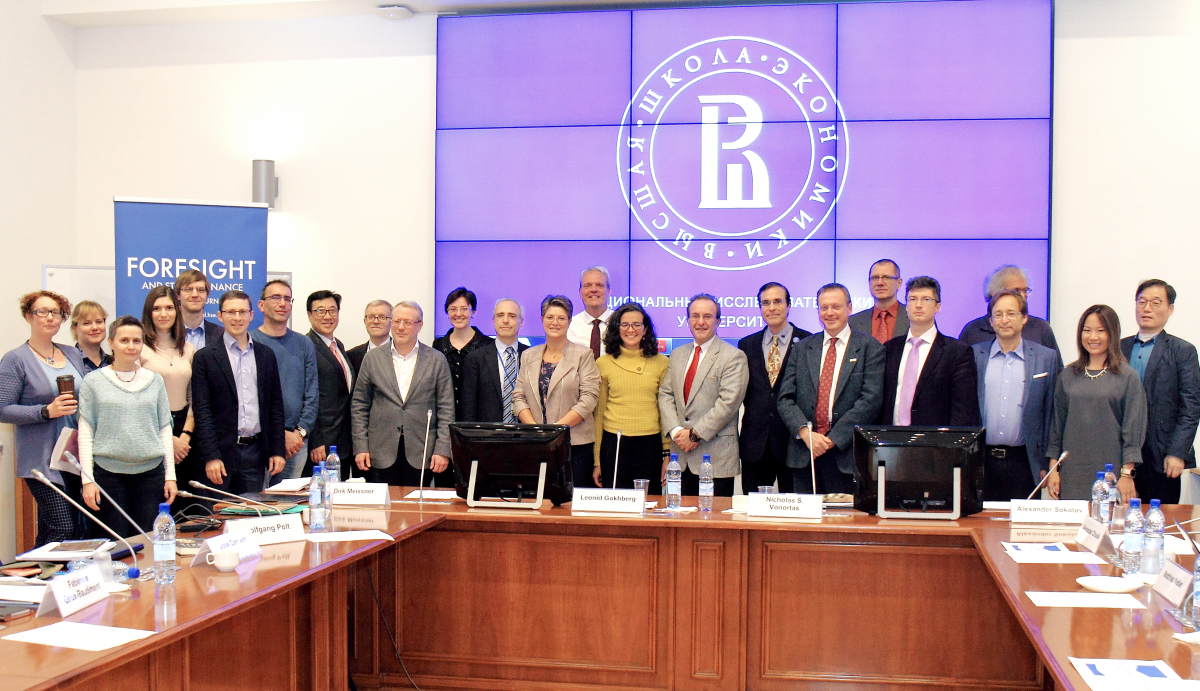 Leonid Gokhberg, HSE First Vice Rector and ISSEK Director, spoke about the institute’s activities during the past year. The team’s progress in three key areas — STI statistics, foresight, and evidence-based STI policy — was illustrated by relevant figures such as growing numbers of staff members, publications, projects, research collaborations, and tools. Extending not just the number of research projects but also their scope requires constantly improving methodologies, checking them against the changing context and best global practices. A specific set of objectives arises due to rapid development of the international Master’s programme 'Governance of Science, Technology and Innovation' launched by the ISSEK five years ago.

The ISSEK team discussed the results, and the plans for the next cycle with the members of the International Advisory Council — leading researchers at partner universities and think tanks such as the Singularity University (US), the University of Sheffield (UK), the Seoul National University (Republic of Korea), the Ottawa University (Canada), the Austrian Institute of Technology, Joanneum Research Centre (Austria), the Strategy Group of the Singapore Prime Minister's Office, the Centre for Strategic Studies and Management of Science, Technology and Innovation (CGEE) (Brazil), the proGective Futures Studies Centre (France), etc. The meeting was chaired by the Council’s Head Nicholas Vonortas, Professor of Economics and International Affairs at the George Washington University (US).

Presentations by international experts revealed a number of trends which largely determine the national and global S&T agendas. This part of the discussion was moderated by Alexander Chulok, Director of the ISSEK Centre for Science and Technology Foresight.

E.g. one of the consequences of the accelerated S&T progress is that not just ordinary people but even governments cannot react to the changes in time. This requires rethinking and reformatting the 'common sense' approach to managing the science, technology and innovation sphere, or the evidence-based policy making. Researchers’ focus is shifting from monitoring purely technological changes towards analysing the socio-economic context of suggested, and actually made management decisions.

Deep integration of foresight studies’ results into the decision-making system implies making special communication effort to inform all stakeholders about them. Development of foresight tools is moving on towards maintaining increasingly broad dialogue with users. Successful conclusion of a foresight project involves not just production of a final report but providing subsequent support, and monitoring relevant projects in close cooperation with the customer.

Addressing socio-economic and humanities-related aspects of S&T development also helps implement foresight projects in a more efficient way. The council members recommended to pay more attention to analysing public attitude to science and new technologies, and their impact on the society. As the S&T agenda gets more complex, identifying effects of the ongoing transformation becomes critically important, including changes in the social environment. Demand for analysis of S&T sphere’s impact on the labour market is growing, along with that of prospective competences and new, emerging professions. Consumers of foresight studies’ results, in particular in the corporate sector, now comprise not just strategists and technologists whose responsibilities involve R&D and innovation, but also HR professionals.

According to the council members, cooperation with the creative community can make a large contribution to further development of foresight studies. The search for new predictive formats and narratives in a way brings foresight back to its 'sources' — futures studies and science fiction, especially keeping in mind the need to consider rising ethical issues such as, e.g., maintaining privacy and 'personal space' in the situation of increasing digitisation. On the other hand, big data analysis and artificial intelligence are increasingly often applied in foresight studies proper.

Among the successful results achieved by the ISSEK teams during the past year the council members noted application of the iFORA tool — the intelligent big data analysis system — in most of the foresight projects, along with significant extension of the latter’s scope and geography. More detailed discussions of methodologies and results of new long-term foresight studies, measurement of research and innovation activities, and application of results for shaping and evaluating STI policies took place during the conference. They will be presented in a series of reviews.