Cooperation between Science and Industry

The HSE Institute for Statistical Studies and Economics of Knowledge analyses the dynamics and rate of industrial companies’ cooperation with R&D organisations.

In 2017, 790 industrial companies (3.3% of their total number) implemented joint projects with R&D organisations. Innovative companies that focus on manufacturing competitive products are primarily engaged in such cooperation. 27.4% of companies involved in the development and application of technological innovations took part in networking with R&D organisations. Companies that do not take part in innovation-related activities typically do not network either; their share in R&D cooperation is just 0.7%.

In a ranking of European countries, Russia is in the middle, ahead of several nations with higher level of innovation development (such as Germany, Portugal, Italy, etc.). The leaders are Belgium (61.2% of companies), the UK (58.2%), and Estonia (56.1%).

When applying technological innovations in 2017, 6,900 R&D and innovation projects were implemented, some of them within the scope of state S&T programmes, federal targeted programmes, and international programmes (6,300 in 2016). The vast majority of such projects (more than 90%) were implemented internally; 3.5% in cooperation with EU Member States, 1.6% with the CIS countries, 0.9% with the US and Canada, and 0.8% with India and China. 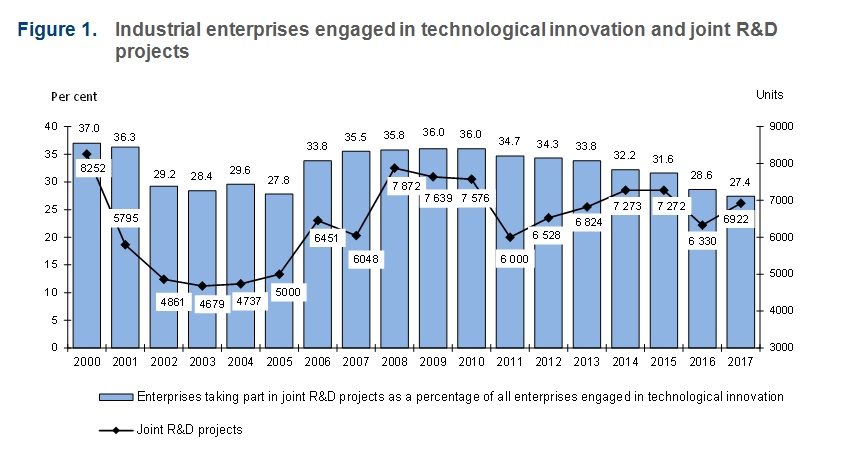 The level of technological cooperation varied in different industries. Innovative high-tech companies were most open to external links, with 40.8% of them implementing joint R&D projects in 2017, while the corresponding figure was 44.3% for companies involved in the production of computers, electronic and optical products (see Fig. 2). In medium-technology industries, 35% and 36.3% of companies took part in network cooperation, respectively. In a number of industries, the corresponding figures were 1.5–2 times higher than the average, namely in metallurgy (59.8%), production of transport vehicles and equipment (53.1%), and coke and oil products (45.9%). In low-tech sectors, this indicator does not exceed 9.3%. In mining, about a third of companies are engaged in R&D cooperation (33%) (75% of coal production firms). 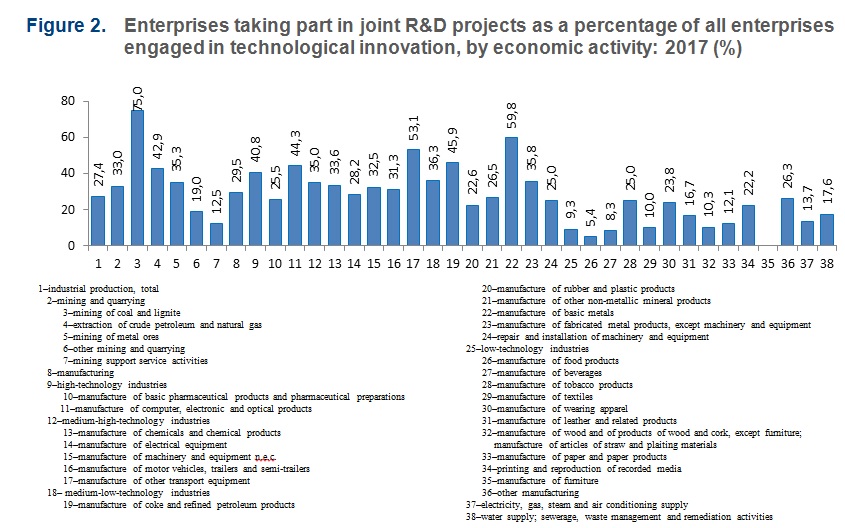 R&D organisations serve as important strategic partners for industrial companies when it comes to innovation development: 45.4% of such companies cooperated with them in 2017. In high-tech sectors the corresponding figure was 49.6%, in medium-technology ones — 41% and 51.4%, respectively, and in low-tech industries — 24.4%. In the mining industry, 63.6% companies had links with R&D organisations. Cooperation was particularly active with suppliers of equipment, raw materials, components, and software (40%), especially in low-tech industries (62.2% of innovative companies). A high level of cooperation was also noted among companies belonging to the same corporate groups as innovation developers (34.3%), and in high-tech sectors (40.3%). A third of companies (31.5%) involved universities in their innovation activities, and a quarter cooperated with consumers (26.9%). Contacts with consulting firms and competitors were mostly sporadic (11.3% and 7.4% of companies, respectively).

Sources: HSE ISSEK calculations based on data from the Federal State Statistics Service; Eurostat; results of the project “Study of innovation process participants’ activities: development of theoretical framework and methodological approaches” carried within the scope of the HSE Basic Research Programme. 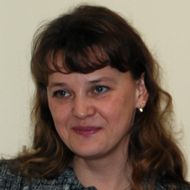