On the Russian Science Day (February 8) an infographic report entitled ‘Russian Science in Figures’ was published. Leonid Gokhberg, director of ISSEK and the first vice-rector of HSE, has commented some of its main points to HSE web-portal. 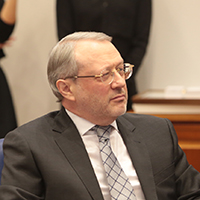 What do Russian Scientists Write About?

Over the last few years, the number of publications by Russian scientists in international journals has increased at a faster pace than in many other countries. In fact, in 2016, Russia came 14th in the world publication ranking. However, Russia is held back somewhat by problems with structural indicators, for example, with citations, which remain low. About a third of articles published by Russian scientists are in co-authorship with foreign colleagues. This is, of course, a good thing, because it demonstrates strong international scientific cooperation. However, in highly-cited publications, the percentage of articles with foreign co-authorship is as large as 90%, and this indicates the insufficient strength of our Russian authors' potential.

Russian research follows the tradition of Soviet science. In comparison with the rest of the world, a large number of articles are published in fields of science which were major foci under the Soviet Union, and where significant progress was made, which was able to be preserved. This includes physics, space exploration, mathematics, chemistry, materials science and Earth science. Unfortunately, we failed to harness the research potential of the most dynamic areas, which are now on the crest of a new technological wave. This includes the life sciences (e.g. biology, medicine), and cognitive and computer sciences. Social sciences also come into this, as they are converging more and more with the natural sciences.

Where is Russian Innovation Headed?

Continuous monitoring and evaluation of the quality and effectiveness of scientific research is very important, and such an assessment should take into account the most important factors, that is, socio-economic, global scientific and technological trends, as well as market demand. This should be the benchmark for setting priorities. This is certainly the case with applied science- it should reflect the future demand for technology. And, even in the more traditional areas of Russian research, it is important to evaluate its structure more carefully: to what extent do these or other research foci correspond to prospective trends? It may be necessary to prioritize those where there is a real potential to make headway, that is, potential for real development.

Over the last five years, Russia has moved from 62nd place to 45th in the global innovation index (GII). However, in terms of ‘influence of innovation’ – an important GII indicator - Russia doesn’t even make the top hundred. This indicator is related to the scale of production in high-tech industries, such as aircraft construction, the space sector, instrumentation, medical equipment, electronics and telecommunications. Compared to the existing oil and gas component of the economy, and the very high percentage of trade and other service industries, these high-tech industries make up a very modest share of the economy.

Are There Enough Resources for Russian Science?

In terms of government budget funding allocated to science, Russia is among the top ten in the world, ahead of countries such as Great Britain and Italy, and is almost on the same level as France. However, in these countries, in contrast to Russia, the lion's share of science spending is done by companies. The same is true for science spending in terms of the GDP- Russia is only ranked in the top thirty. Clearly, science is not a priority for economic agents in Russia.