Technology Platforms as a Technology and a Platform for International Cooperation

Technology platforms, which allow participants to allocate resources invested in value chains more sensibly and efficiently, is a relatively new STI policy tool. It was originally designed in the early 2000s in Europe and then, following its successful application, adopted in Russia. On 20 May, prospects for cooperation between Russian and European technology platforms were discussed at Higher School of Economics. 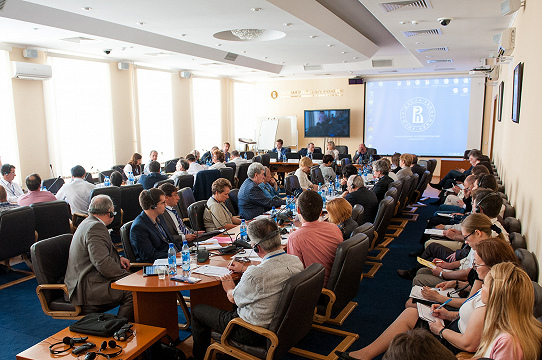 International workshop “Development of Cooperation between Russian and European Technology Platforms” was organised under the aegis of the EU—Russia Year of Science 2014 in the framework of the BILAT-RUS Advanced project (“Advancement of the Bilateral Partnership in Scientific Research and Innovation with the Russian Federation”) of the 7th Framework Programme of the European Union for research and technological development (FP7). The project’s goal is to promote dialogue on STI policy and develop mechanisms for efficient cooperation between Russian and the EU researchers, noted in his opening remarks the workshop moderator, the HSE First Vice Rector and Director of ISSEK Leonid Gokhberg.

HSE provides expertise and organisational support to Russian technology platforms since their foundation (in 2010), and, as a participant of the BILAT-RUS Advanced project, jointly with the North Rhine-Westphalia Innovations and Technology Centre (ZENIT GmbH) helps to establish contacts with European partners. This work is conducted by HSE ISSEK International Centre headed by Anna Pikalova; the Centre hosts two FP7 national contact points — Researchers’ Mobility and International Partnership.

The growing role of international partnerships in the science and technology sphere was the leitmotif of all presentations at the workshop. The first to make this point was Leonid Gokhberg. The new re-industrialisation, globalisation of research and development, swift proliferation of radically new technologies create the need to update agendas for politicians, diplomats, and scientists. Recently the RF Government approved the Russian S&T Foresight 2030 — an attempt to envision major global trends, challenges and possible answers to them in the science and technology sphere. Based on this document, participants of the national innovation system can check and adjust priorities for their strategic development programmes, including those set in federal-level documents such as national programmes, noted the HSE First Vice Rector.

To the federal government, technology platforms are not just an important communication tool for the innovation system’s actors but also an instrument for identifying priority areas for projects the government intends to support in the framework of relevant programmes. Technology platforms’ key role in designing such projects was stressed by the RF President in his December address to the RF Federal Assembly, reminded Leonid Gokhberg, and then invited the workshop participants to have a productive discussion stressing that its results would be used to prepare recommendations on creating S&T cooperation mechanisms, for consideration of the next meeting of the Joint EU—Russia Committee on cooperation in the field of science, technology and innovation later this year.

Ludmila Ogorodova, Deputy RF Minister of Education and Science, told the audience that the Ministry was quite straightforward in interpreting the President’s instruction about the role of technology platforms as a consortia building tool, with compulsory representation of research and education organisations, companies, and service structures. Ludmila Ogorodova spoke in particular detail about the role of businesses in such consortia, since their participation contributed to reducing the risks and increasing efficiency of public investments in development of the S&T complex, and especially applied research.

The course towards bringing actors of the innovation system together was set in the previous Federal Targeted Programme “Research and Development in Priority Areas of Russia’s Scientific and Technological Complex 2007—2013” (FTP R&D). 6 billion roubles were allocated to finance R&D in the framework of this programme, supported by technology platforms.

Ludmila Ogorodova reminded the audience that the President has set another major objective: update the country’s S&T development priorities and the list of critical technologies for the next four-year period. This work will be undertaken during the current year, some of it “jointly with our EU colleagues”. HSE will provide scientific, methodological, and organisational support.

The Deputy Minister believed developing cooperation between international research teams was also important, due to the overall trend towards globalisation of research and education — and especially in the current rather difficult political situation. “We certainly wouldn’t like to loose these contacts”, stressed Mrs. Ogorodova. Development of long-term scenarios for such high-priority sectors as pharmaceuticals, health, biotechnology, transport, space, aviation, and IT are “the objectives which bring our countries together, rather than drive them apart”, noted the Ministry’s representative. Technology platforms play a major role in supporting new sectors of the economy, primarily by providing opportunities to join efforts in development areas of high priority to the country — and furthermore, to Europe and the world.

Technology platforms will be increasingly involved in operations of agencies established by the RF Presidential Council for Economic Modernisation and Innovative Development’s Presidium, first of all the IDC on Technological Development.

Pavel Rudnik urged representatives of Russian technology platforms to improve the quality of their strategic research programmes. He also brought the audience’s attention to the recently launched web portal Innovation.gov.ru commissioned by the Ministry, where users can find structured information about actors, mechanisms, and tools of the national innovation system. In particular, a large section is devoted to technology platforms. There are plans to develop an English language version, which would of course simplify communication between Russian and European partners, and contribute to promoting our technology platforms.

Turning Europe into an Innovation Union

First ETPs were established in 2003, after the European Council called for a strengthening of the European Research and Innovation Area by “creating European technology platforms bringing together technological know-how, industry, regulators, and financial institutions to develop a strategic agenda for leading technologies”. To date, there are about 40 officially recognized technology platforms active in the European Union. These ETPs are industry-led stakeholder fora, which develop short- and long-term research and innovation agendas and roadmaps for action at EU and national levels, i.e. at the level of EU member states. They are supported by both private and public funding. Their task is to contribute to increasing synergies between the different research actors, by ultimately enhancing the European competitiveness. They span a very wide range of technology areas, and have played an important role by developing strategic vision, setting the research and innovation agenda, and defining research priorities, including those under the EU research framework programmes.

Mr. Burger stressed that the European Commission (EC) neither owns nor manages the ETPs, which are independent organisations, but the EC has supported the development of the ETPs and tries to carry out the coordination role. The ETPs are bottom-up industry-led initiatives, and the EC participates in their events as an observer and tries to facilitate a structured dialogue with them on research priorities.

In relation to the EU’s new framework programme for research and innovation “Horizon 2020”, the core task of the ETPs is to develop strategies and to provide coherent business focused analysis of research and innovation, as well as to create opportunities related to addressing societal challenges, promoting industrial leadership in Europe, mobilizing industries and other stakeholders within the EU to work in partnership, information sharing and enabling knowledge transfer to a wide range of stakeholders across the EU.

In a number of key technology areas, the strategic research agendas were developed by the ETPs, which formed the basis for creating long-term large-scale public-private partnerships in the form of so-called Joint Technology Initiatives (JTI), which bring together industry, the research community and public authorities (Article 187 of the Treaty on the Functioning of the European Union).

The history and the existence of such structures as ETPs and JTIs are closely linked to the specificities of the EU research and innovation landscape — the existence of the European Single Market, the coming together of the national research systems of the EU member states, and the ongoing effort to create a truly Pan-European Research Area, the increasing dialogue between European public authorities and industries on the formulation and implementation of EU research and innovation policies and programmes. Despite that, it’s been very encouraging that the concept of technology platforms was considered useful by in Russia and that very quickly after the creation of the ETPs, it was, with appropriate modifications and adaptations, made suitable for Russian specific circumstances. Today, Russian technology platforms (RTPs) are becoming an important instrument of the implementation of Russia’s research, technology, and innovation policies and programmes in practically all technology areas, in which Russia has acknowledged capacities and interests. This has created very favourable preconditions for fruitful contacts between ETPs and RTPs and the stakeholders which they represent. The RTPs today have a very important role in the implementation of Russia’s science, technology and innovation policies and programmes, in particular in the definition of research areas which are addressed in the context of Russia’s Federal targeted Programmes, especially FTP R&D. That makes regular contacts and interaction between Russian and European technology platforms particularly important, more so as the EU and Russia are now trying to find mechanisms between the European Commission’s research and innovation framework programme “Horizon 2020” and Federal Targeted Programme for R&D Priorities in Russia to work together, as they have done successfully in the past, under 7FP and Russia’s previous FTP R&D.

Mr. Burger noted that it’s very important for RTPs and ETPs to have a clear vision of their capabilities and interest in international collaboration, in order to start up a meaningful partnership. The EC appreciates the contacts that have already been made and will continue to play its role in facilitating this cooperation in the future. The current EU—Russia Year of Science may be particularly conducive to the establishment of better contacts between the ETPs and RTPs.

As a personal remark, Mr. Burger expressed optimism about building closer links between the ETPs and RTPs, considering the highly successful record of EU—Russia cooperation in science, technology, innovation and in higher education.

See the next article for information about other participants’ reports, including presentations of 4 European and 5 Russian technology platforms.