Facts about Science in Russia from HSE Research Studies

Science is a large branch of economics in which, the resources are consolidated, transactions are carried out, and significant units of scales are created, and it requires a consistent, and systemic description. For the past 15 years, the Institute for Statistical Studies and Economics of Knowledge (ISSEK) of the Higher School of Economics has been measuring the state of Russian science using a system of statistical indicators and developing a long-term S&T  foresight. On the occasion of the Russian Science Day (February, 8), HSE ISSEK issued two publications — the infographic report 'Russian Science in Figures' and data book 'Science and Technology Indicators'. 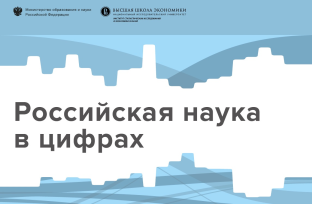 The infographic report presents key indicators that characterize the state and development trends of science and technology in Russia. The paper examines country's positions in the Global Innovation Index, data on the structure and dynamics of the resource potential of the domestic science, its specialization, results and social effects of scientific and technological activity in comparison with foreign countries.The report is based on data from the Ministry of Education and Science of Russia, Rosstat, Rospatent, international organizations, as well as statistical and sociological surveys carried out by the Institute for Statistical Studies and Economics of Knowledge at the Higher School of Economics.

This report is the result of the project: "Conducting research on the state of the sphere of science and technology, directions and tools for its state regulation; development of information and analytical materials based on the results of the conducted studies" with the support of the Ministry of Education and Science of Russia.

Position of Russia in the Global Science

Russia scores high positions in the level of knowledge generation (scientific publications, patents) and their acquisitions (import of advanced technologies, acquisition of rights to the results of innovation activities, job field for scientific personnel in industrial sector is saturated), as well as in R&D sector.

The weaknesses of Russia's innovative development are related to the low effectiveness of the processes of knowledge dissemination (the export of high-tech products and services, the practical use of innovation results) and their impact on the economy and society (the scale of production of high-tech and creative industries, etc.)

Russian scientists published 46 230 articles in 2016 in scientific journals indexed in the Web of Science.

9,29 people — the average number of researchers (full-time employment) per article. This is the highest indicator among countries included in the top 15 based upon their publication activity in 2016.

1/3 of the published articles are written in international cooperation by Russian and foreign researchers. Majority of these articles are highly cited.

The main areas of scientific specialisation of Russia since the time of the Soviet Union are in physics, chemistry, space and Earth sciences, mathematics and materials science: they account for more than half of the international publications of Russian scientists.

The area of technological specialization in Russia is almost constant. In recent years, it has included only two new areas — microstructural studies and nanotechnology, and other consumer goods. Many high-tech areas (chemistry of polymers, biotechnology, ICT) are still not included in the area of technological specialization of the country, despite their steady and positive shift in patent activity.

10th place in the global ratings of patent activity

+39% — the increase in the number of patent applications for inventions by Russian residents filed in the Russian Federation and abroad from 2001 to 2015.

1,17% — Russia’s share in the total number of world patent applications.

In the Russian export of technologies non-registrable intellectual property (R&D, reports, technical documentation, etc.) and services of industrial character (92,6% in 2016) dominate. Their cost is significantly lower than the cost of the objects of exclusive rights.

38,5% — increase in the number of trademark license agreements and patent licensing agreements, industrial designs and utility models from 2005-levels by year 2016. At the same time, the number of patents that are the subject of transactions has grown 2,3 times.

Leadership among European countries with public attitudes toward science, technology, and innovation

Аt the same time, just less than one fifth of the country's population consider themselves sufficiently informed about the latest scientific achievements and possibilities of their practical application. This is one of the lowest rates in Europe.

32% of Russians in 2016 would be happy if their children decided to become scientists.

4th place (after China, USA and Japan) among the ranks of world’s leaders by the number of scientists and researchers

Аt the same time, Russia is the only country among developed countries, where this indicator has been declining for a long time. Since 1990, the number of researchers has decreased by 2,7 times, technicians — 3,9 times.

About 4 thousand organizations carry out research and development. As of 2016, they employ 722,3 thousand people. In contrast to most developed countries, predominantly state-owned research institutes that are separate from both the educational sphere and the production activity dominate. Meanwhile, over the past 20 years, the number of universities that carry out research and development has increased significantly, and their share in the structure of organizations has also increased from 9,7% to 24,3%.

The material and technical basis of science has been gradually recovering since the mid-2000s. In 2005–2016, the value of its fixed assets rose 1,6 times (in constant prices), the value of machinery and equipment increased 1,8 times. The share of the latter in value of fixed assets is increasing (39,5% in 2016 against 27% in 1999), and the service life of the machines is decreasing: the share of obsolete equipment (over 10 years) decreased from 25 to 17,2% in 2007–2015. Most of the machines and equipment are operated for less than 6 years.

10th place in research and development expenditure (% of GDP)

Russia has a general low scientific capacity of the economy, measured as the share of research and development expenditure (% of GDP).

Since 2000, spending on R&D increased 12,3 times in current prices and almost twice at constant prices. Since 2015, growth rate in R&D spending began to decline.

Leading position in the share of government funding of science

In Russia, scientific research is mostly funded by the federal budget. In 2016, the share of domestic spending on R&D reached $ 37,3 billion, or 68,2% (the highest among countries with the largest share of government funding of science).

Since 2000, allocations for civil sciences have increased more than 23,6 times in current prices and 3,7 times at constant prices. More than a quarter of funds is accounted for the support of basic research. 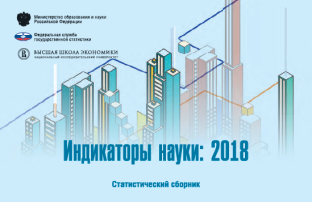 With the contributions by Irina Varzanovtseva.

The present data book is another one in the series of publications, dedicated to different aspects of scientific development in the Russian Federation. It begins with tables, where together with the main science and technology indicators there are data concerning the main innovative activities. The publication presents statistics on R&D organisations, R&D personnel and funding as well as its material and technical facilities. In some sections you may find information about intellectual property, technology commercialisation and usage, international comparisons data.

The data book includes the information of the Federal State Statistics Service, the Ministry of Education and Science of the Russian Federation, the Federal Servicefor Intellectual Property, the CIS Interstate Statistical Committee, the Organisation for Economic Co-operation and Development (OECD), the European Commission, Eurostat, UNESCO, the World Intellectual Property Organisation, as well as results of methodological and analytical studies conducted by HSE Institute for Statistical Studies and Economics of Knowledge.

In some cases the data amends the information published before.

What Else to Read about Science?

Series of Regular Bulletins “Science, Technology and Innovations” (in Russian)

To Increase Knowledge of Science Management

In 2017, with assistance from the Ministry of Education and Science of Russia, HSE ISSEK launched the online project "Knowledge Network" (in Russian) to exchange best practices in managing scientific researches and scientific and technical results. Within the framework of the project, the platform for exchange of experience was created, that covered the most effective practices in a number of key aspects of management in science, such as: organization management; personnel policy; material, technical base and infrastructure; management of financial resources; communication and cooperation; management of scientific results.

For the future scientists

In 2014, HSE ISSEK launched English-language master's program "Governance of Science, Technology and Innovation". The program is aimed at training new generation of specialists who have a consistent and contemporary knowledge for analysis and management of the field of science, technology and innovation — from their inception to implementation, and at different levels — corporate, regional, national and international. HSE is the only university in the world where politics and management in the field of science, technology and innovation are united within one master program.

On April 10–13, 2018, in Moscow, National Research University Higher School of Economics (HSE) will be holding the XIX April International Academic Conference on Economic and Social Development. Within the framework of the Conference, HSE Institute for Statistical Studies and Economics of Knowledge will traditionally organise Section S “Science and Innovation” and associated sessions devoted to the discussion of current agenda of S&T policy, foresight and the questions of scientific and technological development in Russia and foreign countries.

Registration is open till April 6